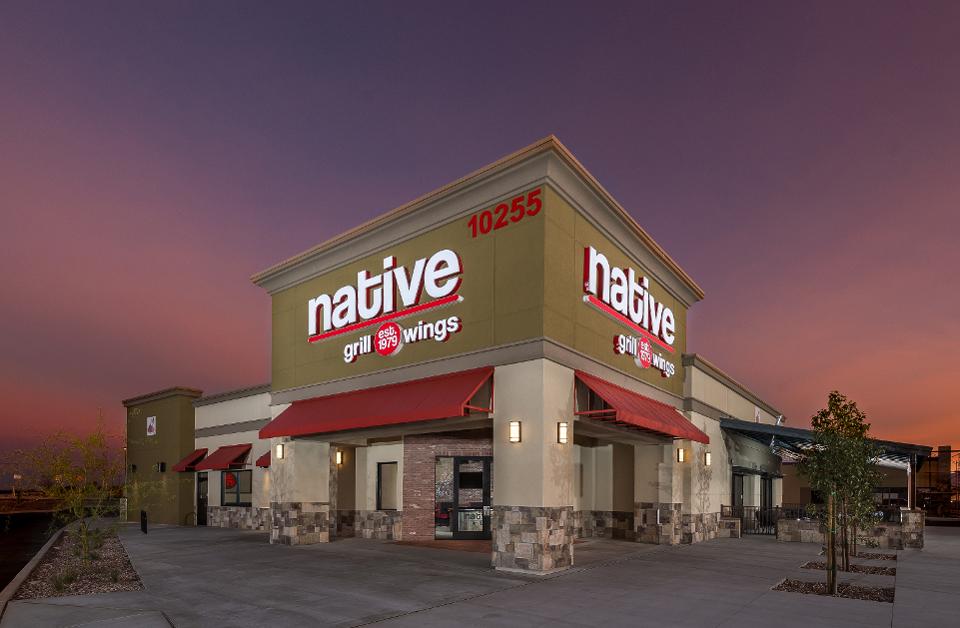 Native Grill & Wings has a host of competitors in the chicken wings space. Not just chicken wing franchises like Buffalo Wild Wings and Wingstop, but also Hooter’s, Domino’s and Applebee’s.

Everyone, it seems, wants a piece of chicken wing’s tasty revenue.

Nonetheless, Native Grill & Wings was named one of the Top 50 Emerging Restaurant Chains in the U.S.by a leading industry trade magazine.

In fact, Native Grill & Wings has thrived in the state of Arizona, where 26 of its 28 outlets are located, and it hasn’t strayed far from its roots. In fact, it has one outlet in San Antonio and another in Quincy, Illinois.

Franchising has been Native Grill’s number one growth driver. Indeed, every one of its locations is franchised; none is company-owned.

Native Grill & Wings launched in Buffalo, New York, 41 years ago, often referred to as the “wing capital” of the U.S. It was started by the Anderson family, who sold it to private interests, though the Andersons kept a small ownership percentage and operate one outlet in Tempe, Arizona.

Growth has been gradual as Native Grill opened one new franchise in Phoenix in 2019.

Its three most popular dishes—and there are no surprises here—are: traditional wings, boneless chicken wings and native Buffalo fries.

Like most chains these days, it offers a variety of delivery options including its own mobile app, its website and a slew of third-party delivery services.

Here’s what Chandler, Arizona-based CEO Dan Chaon, who has been CEO since 2010, said about Native Grill & Wings’ growth.

Native Grill has stiff competition from Buffalo Wild Wings, Wingstop, Hooters’s and others. What makes it stand out?

So what is Native Grill’s niche?

Chaon: Our niche is we were the first to bring wings to the Southwest. We have a 41-year history of being the first choice in wings. And the second factor is, you order wings in any of our 20 different flavors. That’s been part of our culture for 41 years..

Native Grill & Wings is strong in Arizona but negligible outside of it. Why stay mostly in Arizona?

Chaon: We’re bullish on neighboring states such as Texas, Nevada and New Mexico. But part of our strategy is planning on capitalizing on the market left in Arizona. Our number one goal is to service our customers and franchisees. We can better do that if they’re at our arm’s length.

What will it take to expand beyond Arizona?

Chaon: The key factor is finding the highest qualified franchisees that have the right experience and capital to put together a market presence. As franchisors,  we have to support that market. It’s harder to do that if there’s one in Los Angeles and one in Las Vegas.

Native Grill is entirely franchised. Why?

Chaon: Our main customer is our franchisee. Having company-owned locations would be a distraction, not an upside. We want to get the most out of unit economics for our franchisees.

How do you maintain quality when other entrepreneurs operate it?

Chaon: You have to embrace the entrepreneurship of your owners, because they all believe in small business. The key to the consistency is communication, even though that’s an overstated word. If you include them in decision-making about marketing, planning and other initiatives, that vote is a lot easier to go upstream. That ties directly to their enthusiasm and passion for the brand and resonates down to the manager and then you can get operational consistency.

Chaon: The one-person average is $12.50, but it can go to $27 with liquor and beverages, a little higher than most casual dining spots.

Chaon: We cross pollinate between Gen X, millennials, Generation Z, and Baby Boomers. We do a good job of appealing to families and large parties—that differentiates us from Buffalo Wild Wings. We have a designated bar area and a family dining area, and we embrace communal dining for 12 to 14 guests.

Many Americans are gravitating toward healthier dining. What can they choose at Native Grill?

Chaon: We have flatbreads, lettuce wraps, and traditional wings naked that aren’t breaded and are grilled. We offer grilled tenders, and we have phenomenal salad selections.

On what basis do you choose sites?

Chaon: We have a couple of different software for data points. We look at strong residential rooftop count, because I think some challenges involve the price of real estate. In the olden days, you’d go toward a high-end retail center with a movie theater, but third-party delivery has changed that. It’s more about household rooftops these days.

Growth has been gradual. You opened only one in 2019. Why?

Chaon: We’re trying to stay regionalized-focused. Constraints used to be with capital, but now we have people constraints. We need good real estate, a smaller footprint, and bodies you could put in the building. It’s the toughest time ever for recruiting the labor force. Next year, we’ll probably have two new restaurants. But we’re retooling to take into account the increase in third-party delivery and catering to families. We’re working on a smaller prototype that will involve the right amount of sales with lesser bodies needed.

Describe the increasing role of delivery.

Chaon: It’s been a building block. Our Super Bowl Sunday business is our single largest day, and all of our food, pizza, wings and burger travel well. We were an early adapter in third-party delivery in Arizona. After three years, we use every provider; there’s no benefit with exclusivity. Last year third party was about 9% of our sales.

Two years from today, what do you expect to see with Native Grill?

Chaon: Two years from today, we’ll be a leader in our industry and regional market. In two years, we will have expanded to one or two new states. In two years, we’ll move from 28 locations today to 35. Maybe we’ll have wings on Mars.