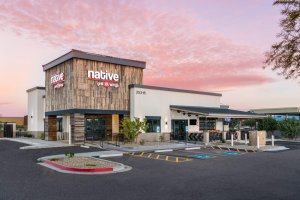 Native Grill & Wings, an award-winning Arizona restaurant chain known for offering over 20 wing flavors that guests can order by the individual wing, – recently ranked in Entrepreneur magazine’s Franchise 500®, the world’s first, best and most comprehensive franchise ranking. Placement in the Franchise 500® is a highly sought-after honor in the franchise industry, as evidenced by the fact that Entrepreneur received more than 1,000 applications this year, making it one of the company’s most competitive rankings ever. Recognized as an invaluable resource for potential franchisees, the Franchise 500® ranks Native Grill & Wings as No.399 for its outstanding performance in areas including unit growth, financial strength and stability, and brand power.

“For nearly 40 years we have strived to provide our guests with the highest-quality of food and memorable restaurant experiences. We are incredibly proud to be recognized as one of the top franchises amongst the 4,000 active systems today,” said CEO Dan Chaon. “It is a true honor to be ranked on the Franchise 500® for the second consecutive year.”

Native Grill & Wings (or, “Native,” as the regulars called it) focuses on food and being family-friendly unlike competitors such as Hooters, Twin Peaks and Buffalo Wild Wings. The polished sports grill proudly offers over 20 wing flavors – from Strawberry Hot to Ancho Chile Lime, Asian Garlic to Honey Chipotle – which guests can order by the individual wing, as well as an extensive menu of burgers, sandwiches, salads and more. Most of the sauces and rubs can be used to customize other menu items.

The restaurants are divided into a bar and restaurant, with approximately 30-40 flat screen TVs throughout, offering sports coverage for families and serious fans, and a customer base spanning all generations – baby boomers, Generation Xers and Millennials.

“As we celebrate 40 years of producing the Franchise 500, it’s a good opportunity to step back and look at how much has changed since that first ranking in 1980,” says Jason Feifer, editor in chief of Entrepreneur. “While the franchise business model has changed little, the strongest franchise brands are constantly evolving and innovating to keep up with changing trends and technology.”

The key factors that go into the evaluation include costs and fees, size and growth, support, brand strength, and financial strength and stability. Each franchise is given a cumulative score based on an analysis of more than 150 data points, and the 500 franchises with the highest cumulative scores become the Franchise 500® in ranking order.

Over its 40 years in existence, the Franchise 500® has become both a dominant competitive measure for franchisors and a primary research tool for potential franchisees. Native Grill & Wings’ position on the ranking is a testament to its strength as a franchise opportunity.

To view Native Grill & Wings in the full ranking, visit www.entrepreneur.com/franchise500. Results can also be seen in the January/February 2019 issue of Entrepreneur, available on newsstands January 15th.